Fight, Admit Defeat or Let Go and Surrender to Change?

Letting go is a relatively modern expression that replaces the military concept of “surrendering” through defeat in combat, along with the very misunderstood religious idea of renunciation.

Although the terminology is specific, many of us confuse the gesture of letting go with sacrifice, giving up, submission, failure, humiliation, weakness, and conquest. because when it comes down to survival, our natural instinct is fight or flight.

Although combat may be the obvious choice for a patient who is “fighting for life,” it does not guarantee victory, and the idea that a disease must be fought and defeated at all costs seems to exclude the idea of surrendering or letting go as an option, or as a conscious choice, although it may happen as an end result when all else fails.

Kay’s relationship with cancer was significant because surrendering to it was a conscious choice:

Cancer wasn’t easy and it certainly wasn’t pleasant; however, I have to admit that fighting was not my response to overcoming it, although I did not submit to it either.

Submitting, resigning, withdrawing or just giving up—we equate all of these to handing over our rights to positive change, which from a self-healing perspective can have disastrous results. Surrender, on the contrary, is not giving up on our ability to change. Indeed, change becomes what we surrender into.

Only after surrender can physical, emotional, and spiritual self-healing occur.

From the metaphysical heart’s point of view, surrendering or letting go is a means of accomplishing the relaxed state of acceptance of what is, a challenging approach to achieve in any circumstances, especially during a serious illness.

One major problem may originate from a common fear of relaxing defenses—the idea that cancer is the “enemy,” an invader to be conquered, can arouse feelings of vulnerability, which can be a dangerous disadvantage, a weakness endorsing defeat. The whole idea of surrendering is equivalent to inviting the enemy to advance toward conquering our territory (the body) which is a rational, fear-based, analysis of war and combat— conquer or be conquered.

Emotions can be fiercely zealous and extremely painful. Attachment means we literally become the emotion, which can be devastating both for ourselves and others. The metaphysical heart creates detachment through space, which permits the emotion to be felt while it is experienced more rationally from a distance. Kay’s words are a perfect example:

Nothing changed concerning my feelings even after all the tests. Was I stunned or in shock? I don’t think so—I know that feeling. Today I am still unable to evaluate the reason I felt so fearless.

Fearlessness is a sentiment that requires familiarity with intense fear in order to be able to recognize the nonexistence of fear. Not to be associated with bravado and audacity, fearlessness is a state of lucid presence comparable to the eye of the tornado—the space of fearlessness within fear itself that prompts acts of courage.

Being defenseless was one of Kay’s most profound vulnerabilities as a child. Her mother, on the other hand, was a “fearless” women who considered Hitler nothing more than a “cake spoiler,” as she intrepidly declared, “The family will live or die together.” She was a heroine, a role model to follow diligently, which of course Kay did. To Kay, as a postwar adult in times of peace, those admirable endurance qualities, once so necessary for survival, became obsolete and nonessential. They functioned, unconsciously to her, as denial of her own physical vulnerability. But life had other plans. Cancer bought the opportunity to surrender old role models and strategies, letting go of what, as a child, had protected her life. As she surrendered to change in the present, the journey from denial to acceptance enabled Kay to embrace, without guilt, the ability to receive care from strangers, building the trust that others would, and could, protect her physically. Regarding her recovery in hospital she commented:

From Denial to Acceptance

Ironically, the only constant is change. Relentlessly in search of harmony, life is a continual transmutation and transformation from one state to another. When our lives contract rather than expand, just desiring change cannot act as a catalyst for transformation. What is required is balance.

Humans are attached to the misconception that we can separate everything into the categories of black and white, where “good” is acceptable and “bad” is repressible and deniable— and balance is rarely achieved.

Our challenge is to embrace whatever arises in the moment even though we may not like what happens and how it makes us feel. Painful feelings deserve to be acknowledged, honored, respected, and given space just as we would treat positive feelings. This is the beginning of self-acceptance, self-love, and internal harmony.

I Accept that I Am Unable to Accept!

Acceptance is another essential quality of the metaphysical heart that is grossly misunderstood. However noble the gesture, it will not come from the heart if it is forced through internal conflict. Contrary to what many believe, resistance or refusal to accept is not uncharitable, wrong, nasty, or selfish if it is put into the right perspective.

Trying to prove otherwise is nonacceptance of a basic truth of human nature—no one is perfect! Convincing ourselves and others what really hurts does not matter at all; is a strategy to force acceptance, either for the sake of respectability or for fear of disturbing others. Nonetheless, whatever is unacceptable will eventually push to be expressed in the long run, usually in the most inopportune moments. Instead of “beating ourselves up” and sugar coating every bitter pill, acknowledging nonacceptance can actually prove to be a very powerful instrument of growth, an opportunity to reexamine and terminate a lifelong liaison with self-judgment and self-blaming. It is time to memorize this mantra: “It’s okay not to be okay!”

From the book: “ the Holistic Approach To Redefining Cancer” Balboa Press 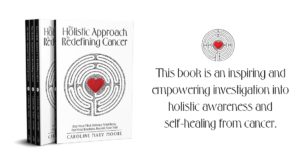